Cook’N With Class kitchen is located in Montmatre

Currently, playing catch up as it was an incredibly active spring followed by non-stop summer since we returned to Japan. So with that, here’s the first of our extended European adventure…

Talk about starting our European trip off right! We had only flown into Paris from Narita the night before but I was up early for my French baking class at Cook’n With Class. Anxious to get in the kitchen and (fingers crossed) learn to make pan au chocolat, I rushed off with barely a nibble at my B&B’s breakfast (though it looked amazingly good). Nothing could get between me and some delicious pastries! 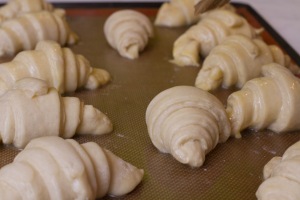 Croissants ready for the oven!

It has long been a dream of mine to take a cooking class in Paris. I’ve done cooking classes around the world and it’s my favorite ways to experience a  culture while traveling. The last time I was in Paris in 2010, the cooking class craze hadn’t totally caught on so all courses were insanely expensive. Now, there are numerous options to suit all budgets around Paris. I was a bit short on time so I selected this cooking school because it was highly recommended by our B&B and it was very conveniently located less than 5-minutes from where we were staying.

A little before 9AM, I met the group with whom I’d be sharing the morning baking experience. We were a mixed bag of Americans from all across the country and a young lady from Istanbul who owns a cake and sweets business. We made quick introductions and chatted about our experiences so far in Paris. Several of the students had signed up for several classes and were raving about the other courses (sad face; I could only take one!).

Chef Briony showing us how to prepare the croissants

At 9 o’clock, we promptly started with Chef Briony explaining the class’s agenda so we could get the most out of our three hours.  Due to the time required to prep and let the laminated dough rest, it had been prepared beforehand. We would create all of our pastries and while they were baking, we would go back to square one and learn how to make the laminated dough.

And with that, we were off! First up was the custard cream for the raisin and fresh fruit danishes. This versatile cream came together very quickly under Chef Briony’s expert eye. Once completed, it was placed on a plate (more surface area so it chills faster – why did I not think of this?!) and covered with plastic wrap to chill in the refrigerator.

Yep, that’s a layer of butter on there! Learning to make laminated dough

Next we learned pound out the laminated dough to begin making the pastries. Laminated dough is pastry dough that is layered with butter. It is folded in a specific sequence to create numerous layers that puff up to become light and flaky. This type of dough is used for all sorts of breads and pastries like pan au chocolat, danishes, and of course, the infamous croissant.

So began the task of running through and learning how to proper prepare the croissant, pan au chocolat (YAY!), raisin danish, and fresh fruit danish. It was a delicious sugar rush! I won’t bore you with the details but we each got to try our hand at making each variety before prepping them to bake. Along the way, we learned tricks of a pastry chef and tidbits on how to incorporate it into a home kitchen. Plus there were plenty of laughs, pictures, and fun.

Once everything was done and resting, it was time to learn how to make laminated dough. Chef Briony demonstrated how the dough was prepared in a KitchenAid mixer. Then she demonstrated how to pound out the butter with precision before it melted. You must move very, very fast during this stage! We took turns pounding the butter and dough. Next up was learning how to properly fold the dough to create the layers. We practiced folding it in a very exact sequence that pastry chefs learn quickly (lucky for us, they provide you with a video along with the recipes so no need to take detailed notes during the class). We had completed the hands-on portion with precision! 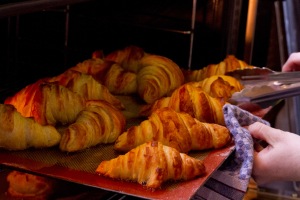 Fresh out of the oven!

At this point, the pastries were baking and smelling delicious so we cleaned up the table, washed our hands and sat down to enjoy our creations straight out of the oven. An interesting tip was that croissants shouldn’t be eaten warm as they need to cool for the flaky layers to form which is why you never get a warm croissant from a good French bakery However, we were too anxious to try them so we immediately dug into croissants, pan au chocolat, and danishes with a strong cup of coffee.

Savoring my pan au chocolat with an espresso

I would definitely recommend taking a class through Cook’N With Class. I really wanted to do the macaroon class but with only 24-hours in Paris, I couldn’t make it happen.  They offer several classes from market tours with dinner to French Desserts, Macaroons, and more. I will definitely be participating in another class next time I’m in Paris.

Note: We stayed at the wonderful Au Sourire de Montmatre B&B. Illhame and her family did everything possible to make it a great trip prior to our arrival. She put me in contact with Cook’n With Class as well as made arrangements for a private driver to pick us up at the airport. The service did not slow when we arrived. The rooms are beautifully designed and the breakfast…the breakfast! Let’s just say it was one of the best breakfasts I had in my 3+ weeks traveling France and Spain! :